Spain and Netherlands are favorites in Group B 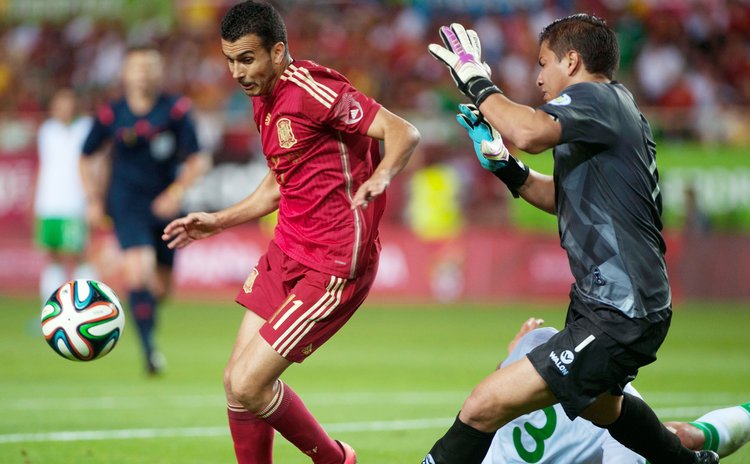 RIO DE JANEIRO, June 5 (Xinhua/Sun) -- Most people may tend to rate Spain and Netherlands as the favorites in Group B to qualify for the knockout stage at the World Cup, but an ambitious, attack-minded Chile is likely to cause upsets while Australia has little chance to progress through.

This is a group of heavyweights. Spain and the Netherlands are the reigning world champions and runners-up respectively, with their first group match to be a replay of the final in South Africa four years ago.

A suspense about Spain is whether or not coach Vicente del Bosque will use the 4231 formation, which fits their "Tiki-taka" football best and will boost their midfield advantage to the greatest extent.

If the 63-year-old boss sticks to a 442 or 433 formation, as practiced in several matches in South Africa and in last year's Confederations Cup, either the Oranje or Chile may have chances to beat La Furia Roja.

The current Spanish team is considered by many as the best ever in football's history. Since 2008, Spain has won three stragiht major tournaments with almost the same group of players, a feat no other team has done before.

If Spain lift the World Cup trophy in Brazil on July 13, they would become the first European side to win the premier soccer event in South America.

Yet some pundits believe this time it is very difficult for Spain to defend world title for the following three reasons:

Second, the Spaniards seemed not in their best form, as they scored only 14 goals from eight qualifying games with a mediocre six wins and two draws. In friendlies, Spain fought hard to earn a 2-2 tie with Chile, and were stunned by South Africa 1-0. Also, Barca players, who make up big proportions of the national team, suffered some heavy defeats in recent years and lost all the titles this season;

Third, after veterans Carlos Puyol and Joan Capdevila's retirement from the national team, their defence is not as solid as before.

Problems do exist, but the Spanish side is still the team to beat with a star-studded squad. With Xavi, Andres Iniesta, Cesc Fabregas, Sergio Busquets, Alonso, David Silva, Juan Mata, Jesus Navas, Santi Cazorla, Javier Martinez at his diposal, Bosque can easily deploy an unparalleled five-man midfield to control the game, and a "false 9" system, which has actually six midfielders, may further strengthen their dominance.

However, sometimes Bosque like to adopt a 442 or 433 formation and weaken their advantage due to a drop in midfielders, which always proved unwise. And every time Spain changed to five-man midfield, good results and nice process always came together.

Spain's bad news is that their creative midfielder Thiago Alcantara suffered serious knee injury in Bayern Munich and had to bid fare well to the World Cup.

Up front, Villa and Fernando Torres are no longer the first choices, while Athletico Madrid's Diego Costa and Manchester City's Alvaro Negredo are strong candidates. And Braca's Pedro Rodriguez and Fabregas may play the spearhead as a false 9 when necessary.

At the back line, Gerard Pique and Sergio Ramos is the ideal central pair, Jordi Alba fit the left back well, and Chelsea's Cesar Azpilicueta is the first choice in Alvaro Arbeloa's absence. The right back is relatively the weakest point, which needs cover from the midfield. Real Madrid's young Dani Carvajal may fit this position, but Bosque may ponder on whether to use this 22-year-old wingback with little international experience. Iker Casillas is safe at the goalline, as he has always made critical saves in dangerous circumstances.

While midfield is Spain's strength, the fortunes of the Dutchmen will rest mainly with their offence. Unlike his predecessor Bert van Marwijk's utilitarianism, Van Gaal has brought a more attack-pro philosophy to the Oranje, and their brilliant qualifying success is a result of this change. Holland took 28 points out of 30 and netted home 34 goals in the qualifiers.

The Netherlands still relied much on the veterans: Robin van Persie is the first choice striker in the 4231 formation. Although the Man United forward met some problems this season in the Premier League, he showed different form in the national team, scoring 11 goals to lead the scorer sheet of the European qualifying round.

Klaas-Jan Huntelaar and Jeremain Lens are the substitutes for the front line. In the midfield, Rafael van der Vaart, Arjen Robben, Wesley Sneijder, and Nigel de Jong are still the pivots, but midfielder Kevin Strootman's absence due to knee injury is a big blow to the Dutchman.

Defence is the Achilles' heel for the Netherlands, unlike their strong midfield and forward line. The backline is formed by less fancied players like Gregory van der Wiel, Rolando Indi, Ron Vlaar, John Heitinga and Daley Blind. With keeper Maarten Stekelenburg together, this defence line need more tests to prove its class.

Chile plays the most entertaining football in the World Cup, their trademark high-tempo, quick-passing and tight-pressing style is rarely seen in the world.

Under Argentine coach Jorge Sampaoli, who shares the same understanding of football with "Loco Bielsa", has upgraded the team to a more powerful level with a group of smart players who are deft at both blocking and attacking.

Sampaoli like to use an aggressive 433 or 343 formation. Eduardo Vargas, Sanchez and Jorge Valdivia (or Jean Beausejour) generally form the front trio. In the midfield, Juventus's Arturo Vidal, Marcelo Diaz and Charles Aranguiz make an iron triangle. At the back, Marcos Gonzalez, Gary Medel, Eugenio Mena and Mauricio Isla are all attack-pro defenders. Real Sociedad's keeper Claudio Bravo is the captain.

Sanchez is the livewire of Chile. He enjoys much more freedom than in Barca, and always beat two or three rivals single-handedly, which is an epitome of the whole team. The Chilean style is not only entertaining but also pragmatic. They qualified for the World Cup final as the third placed team in the South American zone, scoring 29 goals but conceding 25.

If Chile open the scoring first against the Netherlands, they would stand a good chance to win. However, playmaker Vidal is still racing against time after a knee surgery one month ago. Chile's qualifying hopes will be greatly boosted if he can recover timely for the last two group matches.

As for the Australians, they were unlucky to be drawn in a difficult group. The socceroos still rely on experienced players like Tim Cahill at front, Lucas Neil in defence, Mark Schwarzer at goal and Mark Bresciano to pull the strings in the middle.

However, the Aussies are no match of the other three teams in Group B, and they may hope not to make early exit after the first two matches.