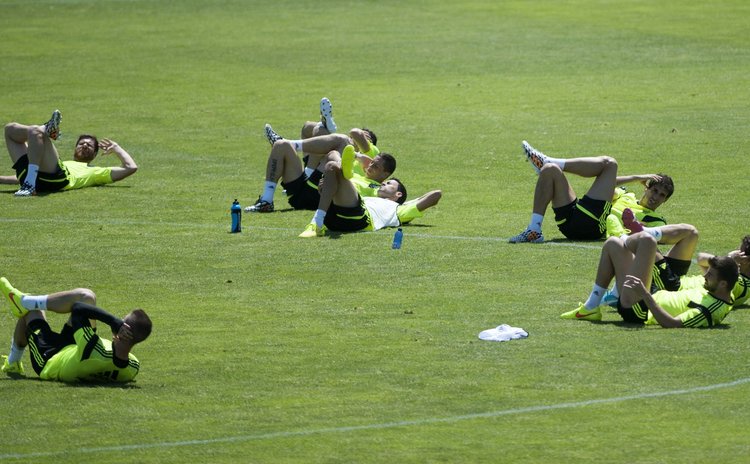 MADRID, June 2 (Xinhua) -- The 23 players of the Spanish football team held their last training session on home soil on Monday before flying to the United States to continue with preparations to defend the World Cup they won in 2010.

The 23 players who were confirmed by Spain coach, Vicente del Bosque held a short training session at the headquarters of the Spanish Football Federation just outside of Madrid.

The players had been given two-day holiday following a 2-0 win over Bolivia in a warm-up game held in Seville on Friday night, before Del Bosque confirmed his final squad at midday on Saturday.

The Spain coach decided to include striker Diego Costa in his squad despite fitness worries, while his decision to take both David Villa and Fernando Torres, who has struggled for goals this season, as the only other remaining strikers has also been questioned.

Del Bosque has placed his confidence in experience and 16 of the 23 man squad, who will defend the World title in Brazil, formed part of the 2010 which triumphed in South Africa.

After training, the squad took part in several official acts, among which was a meeting with Spanish Prime Minister, Mariano Rajoy, who only hours earlier had announced the abdication of King Juan Carlos as Spanish head of State.

Rajoy told the squad they were the best in the World and added that the King had asked him to send his best wishes.

The squad flew out of Madrid airport to Washington DC at 5pm. In Washington they will play a friendly game against El Salvador, before kicking off the defense of their title against the 2010 beaten finalists, Holland on June 13.