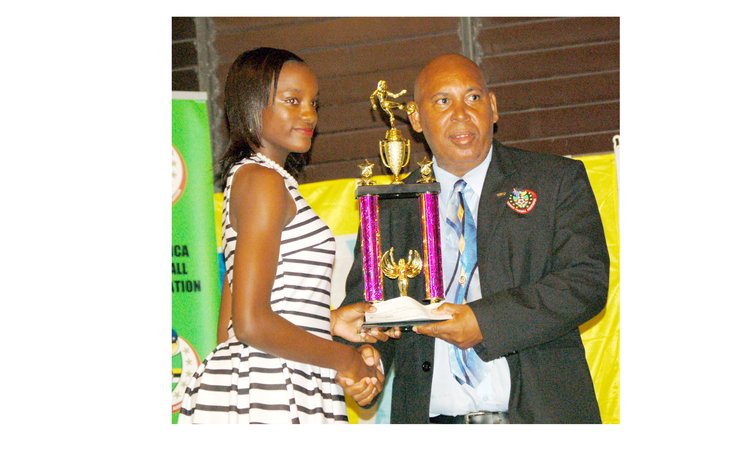 Midfielder Romelcia helped Dominica State College (DSC) in the DFA Sports Division Secondary Schools' Girls' Under-20 football league, which was won in three preceding years by Isaiah Thomas Secondary School. She copped the award for most outstanding midfielder in that junior competition before capturing a similar award for national women's champions, New India Goodwill Runners on her way to being the top female footballer for the past year. It meant that she walked away with three personal awards as well as a bag of football gear and $800 from the DFA for being the top player.

Gylles was in turn the outstanding defender in the NJFA team in the All Island League and Flow Premier Football League on his way to the big prize. He copped three trophies as well as a gift bag and cash prize.

The Rookies of the Year were Suejeta Cuffy of Mahaut Soca Strikers (women) and Shervon Dorsette of RIC Kensbro and Referee of the Year Clive Cadette.

Glenda Fagan was recognized for her decades of medical service to the association, and former player of Goodwill Runners, Annette Bernard received a long service award.

The DFA presented nearly 60 trophies (most outstanding goalkeeper, defender, midfielder, striker and scorer of most goals) at its annual event plus cash prizes in all competitions: Champions State College got $1,000 and runners up Dominica Grammar School $500 in school girls' competition; Bath Estate $3,000 and DNJFA $1,500 in the All Island League; RIC Kensbro $2,000 and Petro Caribe Pointe Michel $4,000 in the Division I League; Dive Dominica Harlem United $2,000 and Goodwill Runners $4,000 in the Women's Division; and Bath Estate $4,000 and champions Dublanc Football Club $8,000.

And more motivation was revealed to the clubs for 2016-2017 season, due to start Saturday August 27, 2016, is increased prize money for the division champions, revealed DFA President Glen Etienne in his welcome address. The premier league teams will play for $10,000; and Division I and Women's League for $6,000. The player of the match in the Premier League will also receive $100.

The DFA Chief informed the gathering that the All Island League was being squashed and would be replaced with age group competitions such as Undr-15, Under-17 and Under-20 for boys and girls.

Peter Greenaway interspersed his feature address with words of advice and his own practical approach which made for his successful career. He began with the benefits of sports which engender friendships and teamwork, good character through fair play, make reliable and responsible adults, and develops self-esteem and positive attitude, physical and mental well-being, and the need for discipline and training especially in one's own time.

He also urged his listeners to stay away from drugs and alcohol and respect all starting with one's own family members, officials and opponents and not least the fans. Greenaway also suggested to the DFA to forge relationships with the business community to grow the sport. He added that the players also had a role to play in the forging of these relationships.

Sports Coordinator Trevor Shillingford agreed that the DFA had much to celebrate because they had successfully come to the end of another season. As a fan, he noted a heightened interest by the public. Adding that there was more to be done, he was glad to see the improved crowds. He also had his share of advice to impart on the association and his listenership towards the improvement in the standard of play. There was a role for the social media in promoting local players and suggestions to the approach in appointing coaches for national teams. He called for the use of more experienced people in that regard.