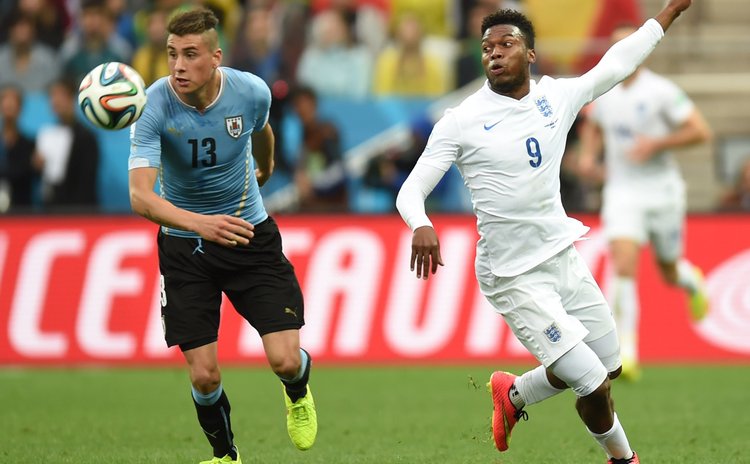 Wayne Rooney scored his first World Cup goal and his 40th for England, taking him joint-fourth on his country's all-time goalscorers list - level with Michael Owen.

Uruguay and England, both losing in the first round of World Cup Group D, fought closely to survive the Group of Death, also containing Italy and Costa Rica.

Liverpool forward Suarez haunted his Liverpool team-mates in the 39th minute when the ball was spread to forward Edinson Cavani on the Uruguay left. Cavani chipped a delicate ball in to the onrushing Suarez, who nodded superbly past England keeper Joe Hart.

In the 75th minute, Glen Johnson made great progress down the England right and played the ball across the penalty area. It bounced across to Rooney who scored his first World Cup goal.

It was elation for Uruguay and heartbreak for England in the 85th minute as Suarez broke through a static Three Lions defense, smashing home past Hart.

Defender and captain Diego Godin was booked on 14 minutes. Uruguay are now on five cards (4 yellow and 1 red) at Brazil 2014, most of all teams.

In theory, England are still alive in the World Cup. If Italy top the group with three wins, and England beat Costa Rica in the third round, England, Uruguay and Costa Rica will share the same three points from three matches. According to the FIFA rule on this World Cup, the qualifiers from teams with same points will be firstly decided by goal difference.