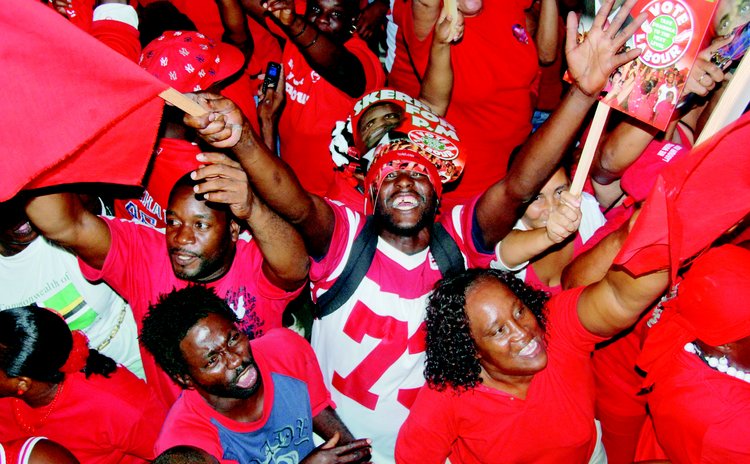 It might sometimes appear to have the look and feel of the legitimist, a patrician and feudalist holding firmly onto the land, and who, surrounded by loyal vassals, is also adored by the plebeians.

It might sometimes seem to have the sense of inevitability, a foregone conclusion, that come polling day, the king will hold on to the throne, while serf, gentry and clergy pay homage.

It can sometimes appear that the day or reckoning is around the corner, with heightened political activity, and now, another poll, commissioned by the ruling Dominica Labour Party (DLP).

It's no secret that the Barbadian pollster, Peter Wickham was here recently conducting research for the DLP. However, few – top DLP operatives among them – knew the full details of his assignment.

"I know he was here but I'm not sure which constituencies (he surveyed)," one top party officer told The Sun.

"The guy was there but I also hear he didn't do a full (survey) in all the constituencies, is just some areas he did," added another person closely associated with the party. An official source has confirmed that polls were conducted in three constituencies, although the source would not say which three until after the results are known.

However, another person with knowledge of DLP activities told The Sun that the Roseau Central seat - held by the United Workers Party (UWP)'s Norris Prevost-and the Roseau North seat -held by the minister of health, Julius Timothy - are likely among them. The third seat polled, according to several sources, is also held by the ruling party.

"Obviously, Roseau Central. That is the one I think they would want to look at, (as well as) Roseau North (which) would be up for grabs in any election right now. I don't think Tim is as powerful as before," said one person, who requested anonymity because of his profession.

In addition, this person told The Sun, Timothy's health and declining popularity meant he was no longer the sort of candidate that the burghers and squirearchy of the DLP would wish to put forward.

"From what I gather Tim is the one holding on. The Labour Party would want to let Tim go but Tim doesn't want to let go at all."

There are questions among those not fully familiar with the DLP's strategy regarding the logic behind the limited number of constituencies surveyed.

"Why three?" asked one person, with more than a tinge of incredulity in his voice.

However, one observer explained that the constituency polls meant the DLP was heightening its election readiness but that a national poll would have to be done for the party to get a good sense of how well it will do in the general election. This meant that the prime minister was unlikely to name the election date when the DLP gathers for its convention on 5 May, a source explained.

In fact, one candidate told The Sun that they were yet to receive the data from the most recent polls, although Skerrit has put them on notice.

"I know the PM (will have) some numbers he wants to discuss with us but he hasn't done that yet," this person said.

No one, with the exception of the UWP faithful, expects the poll results to be a portent of death for the DLP. But the subject remains an enticing one.

The UWP may have the energy and a superior team of candidates, this person suggested, but Dominicans aren't cottoned on enough for the results to be catastrophic for the DLP. After all, he said, the king is far from dead. Long live the king.

"In Dominica Skerrit is king. Maybe not Labour Party per se, but Skerrit, the man is king."