The Harlem Stories Vol. I 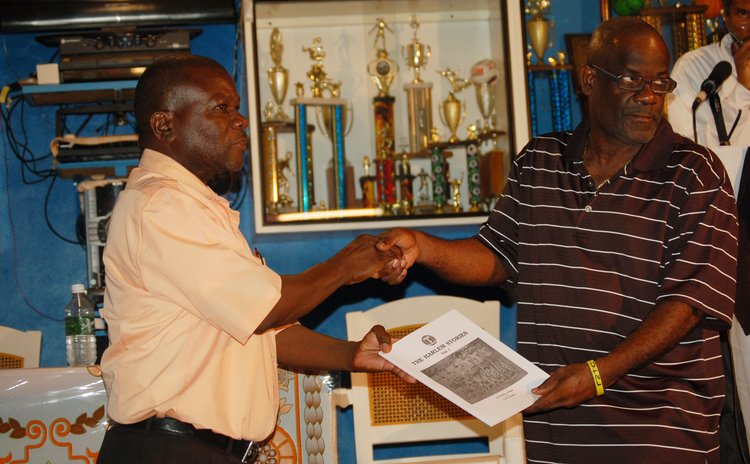 Don Leogal presents a book at the launch ceremony

Dominica's most enduring and successful football club ever, Harlem United Sports & Community Club (HUSCC), has broken new ground with the publication and launching of its inaugural magazine, The Harlem Stories Vol. I.

By the time it was the turn of Member of Parliament Ambrose George to address the assembly of Harlem players, administrators past and current, supporters, and others including OECS Ambassador His Excellency Felix Gregoire, Ambassador Dr Damian Dublin and Chief Librarian Davina Jones, all were in concert for the next volume to roll out in as little as 2-3 years, but more realistically for the 50th anniversary at least, because there was so much material already available.

The Harlem Stories Vol. I was primarily about showcasing the stories of five Harlem stalwarts – Cleville 'Sly' Aaron (deceased), Fred Abraham, Michael George, Peter Greenaway and Oliver Grell – of the club, which was founded in 1970. But by the time Oliver 'O'Grells' Grell , former player and manager had ended remarks on behalf of the stalwarts over some 45 minutes, the master of ceremonies for the occasion, Harlem's PRO Jerry Charles, led the call to tap O'Grells for material for the next edition.

The MC set the tone for the magazine launch in his opening remarks when he noted the respect and acceptance by the society that Harlem football team brought to Charlotteville (Newtown) from "yo enmen goumen" (they like to fight), "yo enmen femin" (they like to smoke) to "yo sah jwe' football, bon!" (They can play football well). He closed with a spontaneous poem "Harlem my beloved" and ending "… we are proud…"

Besides making presentation of a copy to the stalwarts or their representative, HUSCC also presented to the Newtown Primary School, St Mary's Primary, St Mary's Academy and Roseau Public Library.

Oliver Grell who once participated in the production of a football magazine in the 1980s when he was president of the DFA began by quoting one of the many phrases in The Ten Commandments movie: Harlem Story – "Let it be written, let it be done!" The written word, he continued, would outlast the spoken word.

He went on to look briefly at his fellow stalwarts of Sly who was a goalkeeper and founding member of Harlem Rovers who never got the recognition that he deserved. Fred Abraham he saw as a sample in taking on the job as manager in the mid-1970s for a good 10 years; and Mikes George and Peter Greenaway post-Independence players.

Grell traced the development of Harlem formed by teenaged friends, into a formidable football team, the fitness they applied to their preparation, communications with or without words, the family support, wider community support, the composition of teams which included players from Pointe Michel and Loubiere, Kingshill, St Joseph and as far afield as Portsmouth and other initiative which makes Harlem into an institution, something much more than a club.

Arlington James gave a history to the development of the magazine which began with a series of interviews for Harlem award ceremonies in 2003 and 2004. He conducted interviews with the five stalwarts honoured in The Harlem Story Vol. I. He came across the CD with the interviews in 2012. He contacted Don and mentioned getting all that information out in a publication. Don jumped at the idea. The Harlem Stories Vol. I was born.

The Harlem Stories Vol. I has 68 pages, about 30 photographs, a couple of cartons which appeared in The Chronicle in the 1980s, "The Bombers from Sout'" road march calypso hit of De Ency.

Arlington like O'Grells was also in depth in his presentation. MP Ambrose George agreed with listeners that between the two, Grell and James, they had gotten the full story, adding: "we are almost ready for Vol. II."