To kneel, to sit, to stand for the anthem 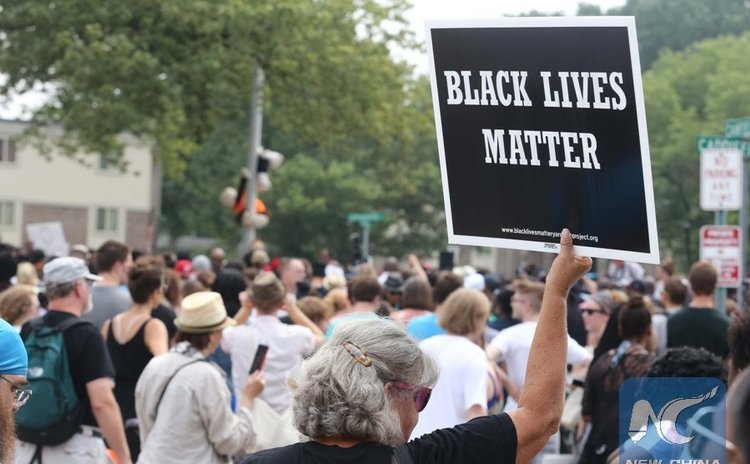 A woman holds up a BlackLives Matter sign at the Michael Brown memorial in Ferguson, Missouri, U.S., on August 9, 2015.
By Reginald St. H Shillingford

The world of sport is shaped by the men and women who play, who manage, who adjudicate, who legislate and one way or another influence the way things happen and are regarded within that realm in which recreation, competition and entertainment might seem to be the key elements. In the last few weeks the hottest topic in big time sports has centred around action taken by Colin Kaepernick, an outstanding player in American football, to launch a protest by not standing up during the playing of the pre-match U.S. national anthem. At first Kaepernick sat down, then later on he knelt on one knee for the anthem. It was his way of drawing maximum attention to the need for social justice to become more action rather than words or simply an idea. From a position of skepticism or uncertainty there has been a growing wave of support for this protest movement coming from a number of now emboldened top notch players – some of them actually white – and in some cases entire teams now joining in for good measure.

Without jumping into the politics of it all, the black man in America is in an ethnic minority and towards him any gift of equality is only grudgingly dispensed. Skin colour has been a barrier taking long to be broken down or lifted. Martin Luther King Jr. and others strove to break it down peacefully and were in some cases slain by opponents of the cause.

It must not be forgotten that it was only in the year 1947, Jackie Robinson became the first African American to be allowed to play in the major baseball league in America. Before that, a player, no matter how talented, was kept out of the big time if he happened to have the wrong skin colour.

Tennis was another sport plagued by the monstrosity of colour segregation to such an extent it was not before around 1953 Althea Gibson, a black tennis star, was allowed to play in the U.S Open at Forest Hills, New York. Mark you, foreign white players were allowed to play, and win, in that tournament while a born American – because she was black, had been excluded. It took the pointed intervention of the famed white player Alice Marble who roundly declared Miss Gibson should be allowed to play, before justice finally came about. Althea Gibson won both the US Open and Wimbledon multiple times before turning professional.

No doubt, the issue of slavery has helped to ingrain in man's attitude, an inflexibility towards a consideration of equality – man towards his fellowman under the brotherhood of basic humanity. The history books tell us that after France lost its colonial hold on Haiti in 1803, there arose the question of financial reparations, not on the part of France towards the former slaves but by Haiti towards the former slave owners! And Haiti took a long time paying off a highly onerous sum!

We are told that the movement towards emancipation in America succeeded in providing freedom of a kind – backed by legislation but void of economic empowerment. Thus, even in the business of providing housing for African Americans the matter of land ownership by the free people was such that their property easily became prey to the evils of an unjust mortgage system – to which whites were relatively exempted! Accordingly, blacks were free on paper but otherwise shackled economically.

Despite the relative social progress which sees a black man as president for the first time in America, the situation is still one beset by an encrusted mindset operating within the mentality of the white majority. Intolerance continues to raise its ugly head and to spit out its venom. That's why James Blake, whose mother is white, was able recently to express his sensitivity about vicious police action suffered by him on the premise of his being mistaken for a felon while he was going about his legitimate business. Blake reveals he had been the subject of anonymous telephone calls presenting death threats calculated to pressure him out of tennis matches after becoming a star player, and presumably a hindrance to white players.

There is difficulty of course, in coming by the related evidence, but it is not by any means impossible that an element of duress may have been a factor in the outcome of some matches played by a number of the stellar black players. Some of their results have at times been odd!

Kaepernick's protest sparks a lot of response coming from white athletes along lines of the good Samaritan, many of whom have been conscious all along of the indignities they have escaped on account of the privileges that go with their skin colour. Some public places in the USA privately reserve the right to refrain from granting service rather arbitrarily. To that extent, the embarrassment of a black friend would be of equal pain to his white companion.

If black lives matter, black dignity does matter. In a perfect world it should never be left to who is administering justice to be persuaded by his racial inheritance, or any other inheritance leading to undue biases. One hopes the current protest will spawn from the genuiness of the human heart – whether that of black or white, and in the final analysis we should be content to be guided by Jackie Robinson's epitaph of the year 1972: "A life is not important except in the impact it has on other lives". Sport, indeed, should impact all our lives. This, we hope for the better! Sport on its own will have helped write a useful chapter in the art of being decently human.