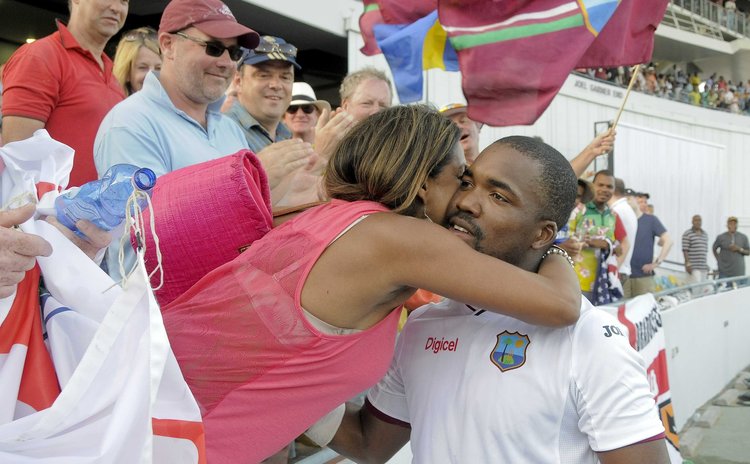 Bravo gets a hug from a fan after his match-winning innings
By Reginald St. H Shillingford

There is a saying sometimes applied in sports to the effect that a high quality official is little noticed. He or she does the required job efficiently and with no fuss whatever, staying on top of situations by force of absolute knowledge and understanding – without unduly obtruding unto the limelight. This latter is left for the players, who really are the ones spectators pay to watch. It would seem, however, that the West Indies Cricket Board compulsively finds very awkward means of being noticed, particularly just when it is sending a team to participate in international events. For the longest time the board has had a minimum of difficulty in attracting controversy. And recent instances have not been any exception.

I have never advocated outright interference by governments in sports. But the call to action by the Grenada Prime Minister to save West Indies Cricket cannot be an unreasonable one. Ownership of the sporting facilities in the Caribbean largely vests in governments of the individual territories. That the use of these facilities by the board to stage regional and international matches may not be unconscionably withheld should not be provided blanket condition for a lack of accountability on the part of the board in the running of its business. Owners of the facilities ought to have a say in how things are conducted. And essentially the public should have a say in how Caribbean cricket is run.

When Darren Sammy speaks out to canvass the intelligence of thinking people by throwing out the view that it is only the players who stand to be punished for infractions committed by them – in gross contrast to the insulation assumed for itself by the board, regardless of culpability for absurd actions taken by it, there has to be a serious rethinking of what West Indies cricket is all about. The board must be held to account, as should any corporation. It may not be a law unto itself and should not hide behind the growing tendency of a number of regional governments to be without scruples about ethics and due legality of process.

Let us look at the case of Darren Bravo, the lead batsman for West Indies in Tests. He was suddenly demoted by being offered a retainer contract of a lower prestige and remuneration, something of the order of U.S. $100,000, rather lower than the $140.000 per year that he had been receiving. Only the opening batsman Kraigg Brathwaite was offered the premium figure. All other Test players were offered the "C" grade contract. One is not contesting the right of the board to differentiate what is offered to the players. It is more a matter of arguing whether the board had ever laid down a scale of remuneration equating with levels of performance, so that players would know where they stood in the scheme of things!

To me it is useful for a player to know well in advance he can earn so much if he achieves at a specified level in the field. Thus, if he manages over a particular period of time to arrive at a batting average of 40, then he merits receiving a retainer contract amounting to so much. Similarly, a bowler would need to know how many wickets he must capture – and at what average, in order to merit whatever remuneration. Then, too, the question of how these figures are appraised in relation to the levels of opposition and whether they are achieved at home or overseas would also come unto the reckoning.

It has appeared rather curious that the level of retainer contract has so suddenly jumped into the picture. Have the players been given any hint of its becoming prominent in relation to performance – rather than a concession to increasing seniority? That is, the older you are in the game the higher your pay, a feature existing ever so long to the effect that any player who had played more than 50 Tests was set at the very maximum, with only the captain receiving more.

Where, then, is the position of the board in regard to responsibility for the West Indies team's performance? Can responsibility for performance be placed solely on the shoulders of the players? I don't see it that way. You, the board, selected the players to represent you, thinking, I believe, they were capable of doing the job of performing creditably against international opposition. If any of them fell short, they may not simply be discarded, possibly with little hope of better replacements on offer. My saying so is painful in view of the waste experienced both with Sherwyn Campbell and Kirk Edwards.

Campbell couldn't play well against credible spin and so has Edwards. In this day and age the board has proven negligent in failing to remedy working deficiencies in those two young batsmen, each with Test centuries under their belts. The time elapsing since Campbell's demise should have afforded ample opportunity to deal successfully with such matters. That this has not been the case has allowed adverse reflection in the instance of Edwards, and may in itself have a bearing on Darren Bravo's inconsistent performances – not to mention Marlon Samuel's batting idiosyncrasies! Taking us to the edge of the overall picture, can we hold out much hope for newer players left to drift without any substantive effort of technical assistance offered for their salvation?

Records have shown Brian Lara to have been one of the very best players of spin bowling in Test cricket. Why can't he be intelligently engaged to help our younger players in the practical applications of reading and responding to batting against spinners? This would, in my view, provide sensible way to improve our batting at Test level. But, then, what sort of retainer contract would Lara be given? If the bar is set at levels of certification, I would say scrap all the certificates! We have failed to arrive at progress while employing all persons of high certification. In Lara's case his valid piece of paper is his unimpeachable batting record.