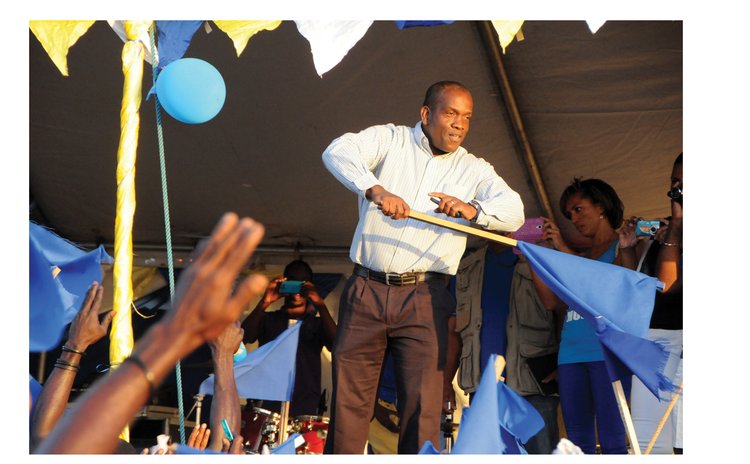 Lennox Linton at a UWP Rally in St. Joseph

On your marks, get set… the gun fires! And the race to be the government of Dominica has begun.

Members of the opposition United Workers Party (UWP) say they are in that race to win as Prime Minister Roosevelt Skerrit on Wednesday set December 8, 2014 as the election date; Skerrit made the announcement in a live address to the nation on radio and the internet.

Reactions from the UWP were immediate; political leader Lennox Linton said the party has been getting ready and was set to go a long time ago.

"We are ready for the elections; we have named our 21 candidates and we are on the ground doing all out necessary work. The CADRES poll which was conducted by the Dominica Labour Party gave us the United Workers Party 18% point ahead of them and Mr. Skerrit was advised by his Bajan consultants against going into 2015 with the elections," said Linton. "We will do much more for the young people and Dominicans in general…we are very happy for the elections to free our suffering people from the hard and long days of Labour Party suffering and misery."

Joshua Francis, another member of the UWP team who will be contesting the Roseau North seat called on the populace to seek God's intervention.

"Pray and fast for the movement of change, go on your knees and ask God to deliver us Dominicans from the clutches of this wicked and incompetent Skerrit-led DLP government," Francis stated. "The Prime Minister and certain elements within the DLP have done a good job for themselves. Families have and continue to suffer because we have a growing class of working poor. A significant number of Dominicans have found it extremely difficult to survive in this country and are struggling to meet their obligations. Case in point the public servants who have received 1.2% increase in their salaries when Dominica has experienced a 4% inflation rate. What it means is that the financial situations of public servants have worsened over the past 15 years. So overall we need to remind Dominicans that this economy is in a significant decline. We are last in exports…and under the DLP we have declined in exports, foreign and direct investments last, minimum wages last; agricultural performance last; stay over visitors last; after all as a nation this is not what we represent".

Francis added: "We are appreciative and grateful and thankful, it's not anything personal, but the time has come where we need to rescue Dominica from a bunch of incompetent guys and to exacerbate the situation some greedy guys. So, Dominica, I and Team Dominica UWP are happy that the date has arrived. We have been focused and passed the message. The DLP has failed and have been involved in character assassinations and have showed us not to stand for principles and morals. We are a country of Christians and every right thinking Dominican should conclude that it's time that the DLP should get out of power."

The UWP said on Wednesday that it was planning to hold 21 Block Meetings in one day in all the island's constituencies "spanning Capuchin to Grandbay".