Where did it all go wrong for Spain at World Cup? 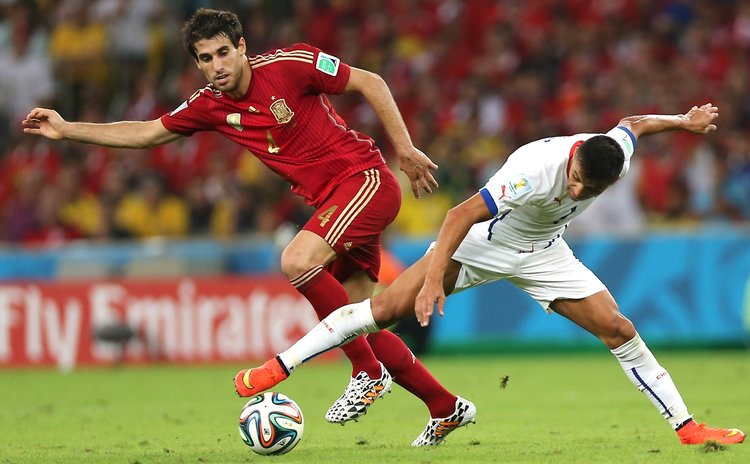 MADRID, June 19 (Xinhua/Sun) -- On Thursday Spain woke up to the reign of a new King, Felipe VI, and the fall of an old one as the reign of the Spanish football team as world champions came to a painful end in Rio de Janeiro with a 2-0 defeat to Chile on the back of an opening day hammering 5-1 against Holland.

The Spanish are out of the World Cup, bringing the curtain down dramatically on six incredible years in which they won: not just the World Cup, but also two European Championships.

While it's true there was always a chance Spain could fail to quality from a group containing Holland, 2010's beaten finalists, and an energetic and well-drilled Chile, nobody expected the failure to be so total and cataclysmic: so what went wrong for Vicente del Bosque and his side? And is the damage repairable?

Perhaps the standout feature of Spain's two performances to date was the lack of energy and spark their side showed and here Del Bosque must hold his hand up: the veteran coach is a man known for his conservative selection policy and also his loyalty.

He took a squad including 34-year-old Xavi Hernandez, who is without doubt the architect of Spain's passing style, but Xavi had shown all season that he is physically past his best. He had been unable to play 90 minutes twice a week for Barcelona and was usually substituted in the second half by coach, Tata Martino.

If this was the case in Spain, why was it going to be different in Brazil with hot weather and higher humidity?

Likewise Xabi Alonso showed signs this season of losing his pace, which was evident in his first half booking against Chile. He too was expected to perform at a higher level in the World Cup than he had done in domestic competition and the same could be said for another midfield lynchpin, Sergio Busquets also travelled after a season in which he struggled with pelvic problems.

All three deserved their place for what they have done in the past, but all three showed in Brazil they were below their best.

Meanwhile the energetic Koke was restricted to 45 minutes as a second half sub v Chile and Ander Iturraspe, who impressed in a warm up game, never even made the squad.

Elsewhere, Jordi Alba travelled despite a season in which he suffered three serious muscle injuries and started both games despite just 90 minutes football in the two previous months.

Del Bosque also showed loyalty to Diego Costa, who had rejected his native Brazil to play for Spain. Costa's presence or not was the main doubt over the final squad as he struggled to overcome a thigh injury which had dogged him for the previous 5-6 weeks. Costa travelled, but other strikers such as Alvaro Negredo and Fernando Llorente didn't even make the squad despite fine seasons in England and Italy respectively.

Of the strikers who did travel, Fernando Torres managed two flat substitute appearances and David Villa, another great whose best years are in the past and who will play his next competitive game in Australia, has so far not played a single minute.

Quite frankly Spain travelled below par and had players who were in no condition to make a difference, but another factor played a hand in this: Spain's preparation.

Del Bosque was handicapped by the fact the Champions League final between Atletico and Real Madrid deprived him of key players to such an extent that he even played a warm-up game with none of them in the side. It effectively took a week to 10 days of Spain's preparation, but the Spanish prepared badly for the extreme heat and humidity in Brazil.

They began preparations in a cool and blustery Madrid, where the temperature failed to go much above 20 degrees centigrade and then flew to the USA. However, instead of going to somewhere hot and humid such as Miami, they went to Washington DC, which gets hot in summer, but in early June is not high summer and fails to offer the experience of extreme playing conditions.

Finally Spain's base in the south of Brazil is the coolest place in the country, the Spanish trained at 15 degrees C, before then playing their opening game at 30 degrees plus, bearing that in mind it's hardly surprising they wilted like dead flowers against the better prepared Dutch.

So where now for Spain? It's obvious this is the end of an era for many such as Xavi, Villa, Xabi Hernandez and probably Fernando Torres, whereas others such as Busquets, Gerard Pique and Iker Casillas (despite a dreadful tournament) probably still have a future.

The good news is that Spain have a wealth of young players waiting in the wings: Iturraspe, Alvaro Moreno, Ander Herrera, Dani Carvajal, Jese Rodriguez, Thiago Alcantara and others such as Gerard Duleufeu offer hope for the future, while Llorente, Negredo, Alba, Azpilicueta and David De Gea, an unused substitute in Brazil should also get another chance.

Whether Del Bosque remains in charge is another question and the feeling is he should ride out the storm, as he has extended his contract until 2016, but Del Bosque should know that he needs to make the changes and perhaps be bolder than he has been for a long time.

In short the King is dead, but with a bit of work, he can come back to reclaim his throne.