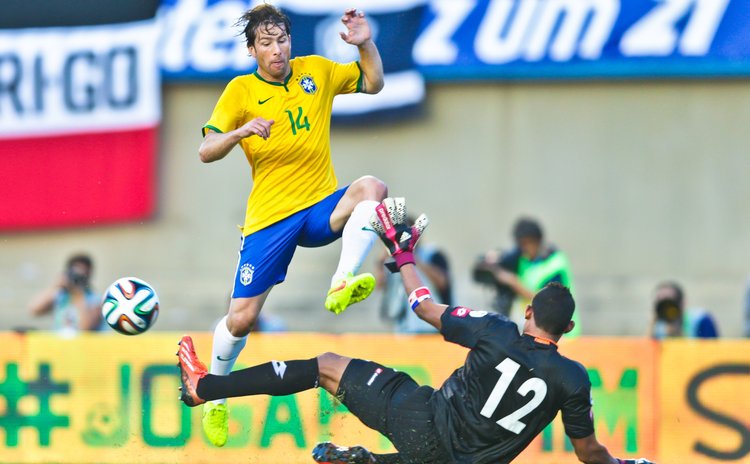 Luiz Felipe Scolari has already proved the wisdom behind the Brazilian confederation's decision to appoint him national coach for a second time after the sacking of Mano Menezes in November 2012.

After winning just one of his first six games in charge, Scolari has led the Selecao to 13 victories from their past 14 matches.

But can the 65-year-old repeat the success of 2002, when he led Brazil to their fifth World Cup triumph in Japan and South Korea?

Several factors say he can. As they showed by winning last year's Confederations Cup with a 3-0 victory over world champions Spain in the final, Brazil are a formidable prospect in front of their home fans.

Scolari's no-nonsense attitude should prevent any clash of egos among the team's higher profile stars while his experience and fatherly presence will help calm frayed nerves.

Then there is the Neymar factor. The 22-year-old showed during last year's Confederations Cup that he is not overawed by big occasions.

But a question mark remains over the starlet's ability to remain fit after injuries interrupted his first year at the Camp Nou.

If there are any doubts over Brazil's team, they revolve around the centre-forward and goalkeeping positions. Fluminense striker Fred has only recently returned to scoring form after missing the last four months of 2013 with a thigh injury while No.1 goalkeeper Julio Cesar joined Toronto FC on loan in February after falling out of favour at Queens Park Rangers.

It is testament to Mexico's depth of attacking talent that even without prolific Real Sociedad striker Carlos Vela, there is no guaranteed starting berth for Manchester United's Javier Hernandez.

Among those to have pressed strong claims for a place in Miguel Herrera's attack are Giovani dos Santos and Oribe Peralta.

Villarreal's Santos netted 11 times and created eight assists last season in Spain's La Liga while Peralta has scored 13 times from his past 13 internationals.

Herrera's 23-man squad also includes forwards Raul Jimenez (Club America) and Alan Pulido (Tigres), ensuring Vela - who has not played for the national team since March 2011 due to a rift with the Mexican federation - will unlikely be missed.

Bayer Leverkusen's Andres Guardado and Porto's Hector Herrera will carry added midfield responsibility after an ankle injury forced Juan Carlos Medina out of the tournament. He has been replaced in the squad by US-born defender Miguel Ponce.

Despite their star-laden squad, Mexico are lucky to be in Brazil after a late resurgence in the Concacaf qualifiers and subsequent playoff victory over New Zealand. They will need a significant improvement if they are to progress beyond the group stage.

If attack is Mexico's strength, for Croatia it is the cause of concern.

To make matters worse, their leading striker Mario Mandzukic will miss the first match against Brazil on June 12 due to suspension.

Beyond the Bayern Munich frontman, Croatia's attacking stocks include Ivica Olic, Eduardo, Leon Benko and Nikica Jelavic, all of whom have failed to impress for the national team.

Key to the fortunes of Niko Kovac's side will be Real Madrid midfielder Luka Modric.

The 28-year-old's composure and full passing range means he can control the tempo of the match while also troubling rival defences with his penchant for long-range shooting. Croatia secured a place in their fourth World Cup after a 2-0 aggregate victory over Iceland in the European regional playoffs last November.

The team drew 2-2 with Switzerland in St. Gallen in March and will fine-tune their World Cup preparations with friendlies against Mali and Australia.

Prediction: Eliminated in second round.

While providing a steady flow of players to top European leagues, Cameroon have failed to progress in the manner many predicted after they became the first African nation to reach the World Cup quarterfinals in 1990.

Since then, the Indomitable Lions have managed just one World Cup victory - a 1-0 victory over Saudi Arabia in 2002.

The current side, coached by German Volker Finke, has shown little to suggest that halcyon times will return in Brazil.

Cameroon earned a World Cup berth despite winning just four of their eight qualifiers, and they were lucky to have been awarded victory over Togo for their rivals' use of an ineligible player.

Encouragingly for Finke, Alex Song and Samuel Eto'o are said to have settled their differences after a bust-up during the 2010 World Cup. The incident led Song to an 18-month self-imposed exile from the national team.

Chelsea striker Eto'o will be eager to show his worth amid reports he is looking for a new club. The 33-year-old has fallen out with Blues manager Jose Mourinho over speculation regarding the forward's age.

Others likely to play a crucial role in the team's fortunes are Galatasaray defender Aurelien Chedjou and midfielder Stephane Mbia, who spent last season on loan at Sevilla from Queens Park Rangers.