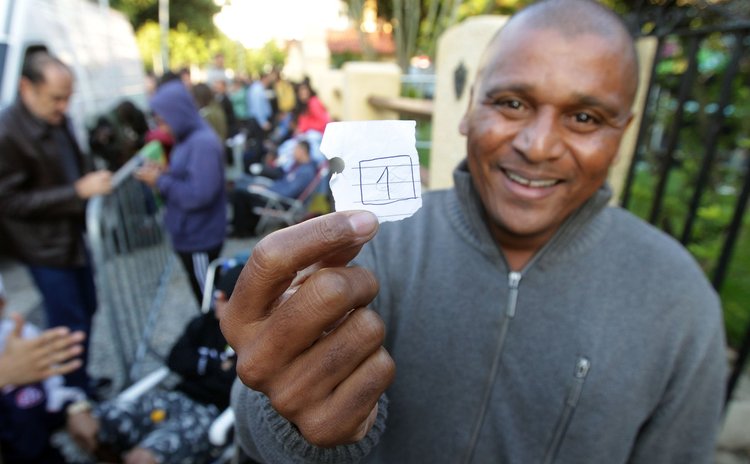 RIO DE JANEIRO, June 5, 2014 (Xinhua) -- A fan shows number one that places him as the first of the row to purchase one of the 180,000 tickets available for the FIFA World Cup games

Among them are sparkling new stadiums, airport upgrades and telecommunications, electric power and security initiatives.

But is Brazil ready to host football's premier event, to be held from June 12 to July 13. Xinhua analyzes key aspects of the country's World Cup preparations.

Each of the World Cup's 12 stadiums has officially opened and football's governing body FIFA assumed control of their operations.

Natal and Manaus have also satisfied FIFA after being inaugurated earlier this year. But workers are still scrambling to finish five other stadiums, including Corinthians Arena and Itaquerao stadium.

Sao Paulo's Itaquerao stadium has caused the greatest concern, and not just because of the deaths of three workers in the past six months.

The venue, which will host the World Cup opener between Brazil and Croatia on June 12, has yet to be tested at full capacity, prompting FIFA to insist another test event be played at the 68,000-seat venue.

After completing a tour of the stadiums in late May, FIFA secretary-general Jerome Valcke said: "The World Cup has already arrived in Brazil and the whole world is watching in anticipation. We have busy days ahead of us with still a lot to be done."

More than 600,000 international visitors are expected to flock to the country during the tournament.

"[The airports] will be used for the World Cup, but they are chiefly made for the convenience of the millions of Brazilians who can now afford to travel by plane," Rousseff said.

"I can ensure that our airports are ready for the World Cup. We'll give all (visitors) a proper welcome."

Earlier this year the government said military airports would be on standby during the tournament if commercial terminals could not cope.

The federal government has spent 800 million US dollars on what has been described as the largest ever World Cup security plan.

The operation will include the deployment of 170,000 military, police and other security personnel.
Rio de Janeiro's government says a 20,000-strong force will be present across the city during the six matches at the Maracana stadium.

There will also be a no-fly zone, limiting air traffic within a seven-kilometer radius of the venue on game days.

And in a bid to prevent a repeat of incidents in Brazil's domestic competitions earlier this year, the federal government has vowed a stadium ban for fans previously convicted of racism offenses.

FIFA and the government have taken steps to ensure mobile telephone coverage at each World Cup venue.

"We've learned from the Confederations Cup, and put specific trucks outside the stadium to enhance the connectivity," Weil said. "But at the end of the day, to be honest, having 70,000 in a stadium, where everybody wants to make a phone call at halftime, well, I'd say you better talk to your boyfriend or girlfriend ahead of the game."

Operators have met their promise of providing 4G coverage in each host city. But handsets widely used in the US, Europe and Australia will not be compatible with Brazil's 2.5GHz spectrum, meaning many tourists will be limited to 3G access.

Under an operational energy plan announced earlier this year, each stadium will be monitored around the clock by national power grid operator ONS.