World Cup Preview: Can Spain once again reign in Brazil 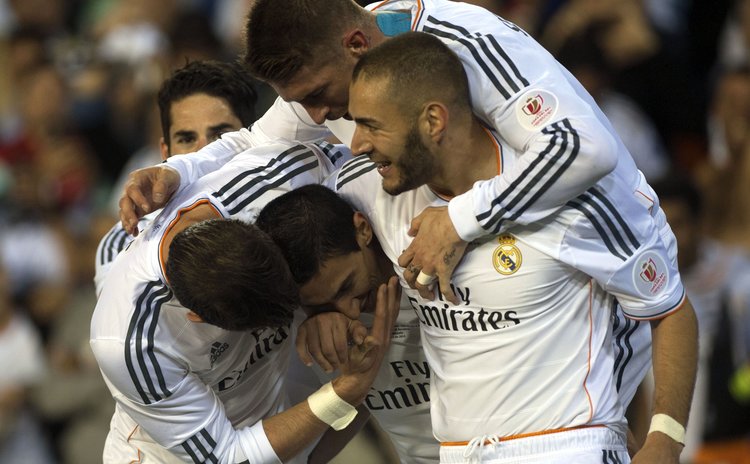 VALENCIA, April 17, 2014 (Xinhua) -- Players of Real Madrid celebrate after scoring during the Spanish King's Cup at the Mestalla stadium in Valencia, Spain on April 16, 2014.

MADRID, April 29 (Xinhua/Sun) -- The Spanish national team that flies to the World Cup finals in Brazil this June will do so as the reigning world champions and as one of the main favorites for the competition, but perhaps the 2014 World Cup will be a tournament too far for Spain.

The Spanish national side has enjoyed an incredible six years since finally casting off its habitual inferiority complex by winning the 2008 European Championship. That side which under the guidance of Luis Aragones showed that Spain can compete against and beat the best, crashed through what had previously been the 'glass ceiling' of the quarter-finals to lift the European title.

It was as if Spain had finally grown up and despite Aragones' replacement by Vicente Del Bosque, Spain have gone on to win the 2010 World Cup and then retain their European title in 2012: something no other side in history has been able to do.

It has been 6 years of unparalleled success, led by a generation of footballers such as Xavi Hernandez, Andres Iniesta, Sergio Busquets, Carles Puyol, Gerard Pique, Iker Casillas, Xabi Alonso and David Villa and which despite the inclusion of players such as Alonso, Casillas, Sergio Ramos and Villa, has its style based firmly on the 'tiki' taca' touch football played by FC Barcelona.

Del Bosque's great talent has been to know that when something worked he didn't need to tinker with it as his players had the talent and the style to take the team to glory.

A conservative coach by nature, Del Bosque has favored evolution rather than revolution during his six years in charge. It is a tactic which has served him well, but which may just leave Spain falling short in their battle for a fourth consecutive major trophy as the aging legs of key players have not yet found adequate replacements. Spain could be like a fine wine which has just been kept for a year too long in the cellar and which is just starting, if not to go off, then to be past its best.

There are few question marks over who will be first choice goalkeeper for Spain in the World Cup: the cruciate knee ligament suffered by Victor Valdes leaves Casillas as the only candidate. Valdes's form prior to his injury had seen him emerge as a serious contender for the jersey this summer, but neither Pepe Reina, nor David de Gea (Valdes' likely replacement) will compete with the Real Madrid keeper.

Casillas may have a weakness on crosses into his penalty area, but compensates by lightening reflexes and speed off his line. He is respected by his team-mates and his good relationship with Xavi Hernandez forms an important bridge across the Barca and Real Madrid camps in the squad.

The fact he has not been first choice for his club in the league has not stopped him performing well in Europe and the King's Cup and Del Bosque will be crossing his fingers nothing happens to him as Reina is not in his class and De Gea is along to gain experience.

A look at the defense may cost Del Bosque a few sleepless nights as it could be one of Spain's main weak points this summer. Spain will be without the talismatic Carles Puyol in Brazil. After 100 international appearances Puyol's aging knees have finally given up, robbing Spain of a never say die defender.

Meanwhile right back Alvaro Arbeloa will also miss out through injury, meaning Del Bosque has to look for solutions, the most likely of which given his conservative nature will be to partner Pique with Sergio Ramos in central defense, with Cesar Azpilcueta on the right and Jordi Alba on the left.

That looks like a solid back line, although the constant muscle problems suffered by Alba this season, could leave him short of fitness in which case Azpilicueta could switch to left back with Ramos moving to the right and Bayern Munich's Javi Martinez stepping in to partner Pique.

The problem with this is that Azpilicueta, although he has played at left back for Chelsea, is not naturally left footed and that would cost Spain in attack, while any injury or suspension would mean the more limited Raul Albiol having to play.

Spain's dominance has been built on their midfield maestros Xavi, Iniesta, Busquets and Xabi Alonso and on paper they will once again make a formidable quartet.

However, anyone who has watched FC Barcelona or Real Madrid this season will know that things have not gone according to plan. Although Iniesta has shown flashes of his creative magic, both Xavi and Busquets have been below their best for most of the campaign.

In Xavi's case it is simply a case of the years catching up on him, while Busquets has looked to be struggling with a pelvic problem. If Spain qualify for the knockout stage, serious doubts have to be raised over whether or not Xavi especially will be able to play 90 or 120 taxing minutes every four or five days and the fact is he has no natural substitute in the squad following the knee injury suffered by Thiago Alcantara.

Alonso has had an acceptable season for Madrid, but he too must now be considered a veteran and an increasing lack of pace will at times leave him exposed. Given that he is a player who never pulls out of a tackle, that lack of pace could cause him problems on the disciplinary front as the competition continues.

Del Bosque has so far failed to find convincing replacements for this quartet and although players such as Cesc Fabrigas (who is more likely to play as a deep lying forward) Koke, Mario Suarez or even Gabi Fernandez, who could make a late charge into the squad, can all be relied on to perform, they lack the experience, sureness of touch and vision which have taken Spain from being contenders to champions.

If Xavi, Alonso, Iniesta and Busquets are at their best in Brazil, Spain can win the World Cup no matter what other shortcomings the squad could have, if they are not (and they haven't been at their best this season), then it is going to be difficult.

Diego Costa will play. That is just about the only certainty regarding the attack Spain will kick their World Cup defense.

It must be worrying for Del Bosque that the only striker certain to be named in his squad is a man who has made one friendly appearance for his country, although there is no doubt that Costa has been the standout striker this season with over 25 league goals for Atletico Madrid.

The player, who has played two friendly games for his native Brazil, is a constant handful for rival defenses, he is an intimidating physical presence, an infuriating actor and a fine goalscorer and once he was qualified to represent Spain, he was a 'shoe in'.

Elsewhere Pedro Rodriguez is also certain to go, given his ability to play on both wings or through the middle and his ability to score important goals.

And then Del Bosque has a problem ... Fernando Torres has had another poor season at Chelsea, where he has struggled to score goals. That has seen him left out of recent squads, although Torres has a habit of scoring vital goals in big matches, such as the 2008 European Championship final.

Alvaro Negredo looked certain to travel after a barnstorming first half to the season with Manchester City, but the striker nicknamed the 'Beast' has suffered a goal drought since January and looks tired, while Fernando Llorente has never appeared to convince Del Bosque he is adapted to Spain's style of play despite consistently scoring for Athletic Club Bilbao and adapting well to his new life with Juventus.

Finally, although David Villa, the highest scorer in Spain's history, has had a decent season at Atletico Madrid, he is another veteran whose best years are almost certainly in the past.

Del Bosque's nature will probably see him take Villa or Torres, but it is likely he will start games with Costa as a lone striker and with Cesc Fabrigas in a role as a 'false 9' looking to join the attack from midfield, where his presence will aim to give Spain numerical dominance. Other players such as the mercurial David Silva could also find themselves with a big role to play in the last third of the pitch.

One final point about Costa is that given he rejected the chance to play for his Brazilian homeland in order to represent Spain, he is likely to be public enemy number one for the Brazilian public. Costa's presence will make Spain one of the least popular teams for the home fans and they can expect to play games to a chorus of boos and whistles, which will reach a crescendo whenever he touches the ball.

Finally any appraisal of any side's chances in the World Cup would not be complete without a look at their rivals and Spain have a tough group, kicking off with a game against the Netherlands, the side they beat in the 2010 final. Well drilled under Louis Van Gaal and with the talented Robin Van Persie leading the line, the Dutch will be tough rivals for a side which has a habit of being slow starters.

If Spain fail to win their opening game and given they can be expected to defeat Australia, the weakest side in the group, that will make their match against Chile decisive. Del Bosque said before the draw that Chile were among the toughest rivals Spain could face and the South Americans are physically tough, technically gifted and with Alexis Sanchez leading the line, they are fast in attack and dangerous rivals.

It will be a demanding opening fortnight for the Spanish, but if they come out of it intact, they have the talent to once again go the distance, if Iker stays fit, if the defense gels, if Costa scores goals and if an aging midfield can find the strength for one last effort.