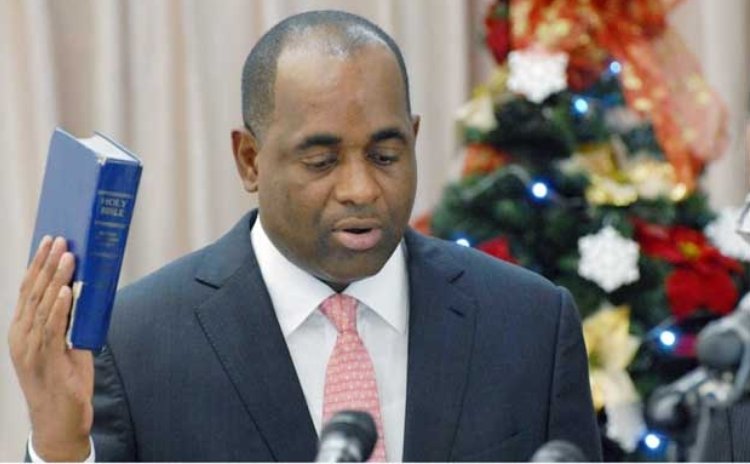 Prime Minister of Dominica the Honourable Roosevelt Skerrit has been sworn-in for a new term. This after the incumbent Dominica Labour Party won fifteen of the twenty-one seats in the general elections of Monday, December 8, 2014. Prime Minister Skerrit said that he was deeply touched by the outpouring of love and support since it became apparent that the DLP had been returned to office.

The Prime Minister stated that the DLP embraces the victory at the polls "with humility and introspection", noting that while there is a smaller working majority in Parliament but nevertheless the DLP has an "overwhelming mandate to carry forward and implement policies" set forth in the party's manifesto.

"The infrastructural projects which we alluded, shall commence and continue apace throughout the next five years. The human resource development strategies alluded to in our various publications, shall also be prioritized. We want to make sure that Dominica remains on the cutting edge of education and technology development," the Prime Minister stated.

Prime Minister Skerrit is looking forward to the opening and operating of parliament. He hopes that new parliamentarians can work with returning members to lift the standard of debate and discourse on the floor of parliament.

"I believe that with the advent of social media, Parliament should not only be a place for the enactment of laws, but should also be a source of education and information to citizens and residents of the country. It is my fervent wish that Parliamentarians will take their responsibilities seriously. I would want to believe that the era of parliament boycotts and walkouts is over. I would want to believe that in the debates of Parliament, support will be given where support is deserving, and constructive criticism will be levelled when merited," Prime Minister Skerrit stated.

The swearing-in of the new cabinet will take place on Saturday, December 13 from 5pm at the Windsor Park Sports Stadium. (Press Attaché)