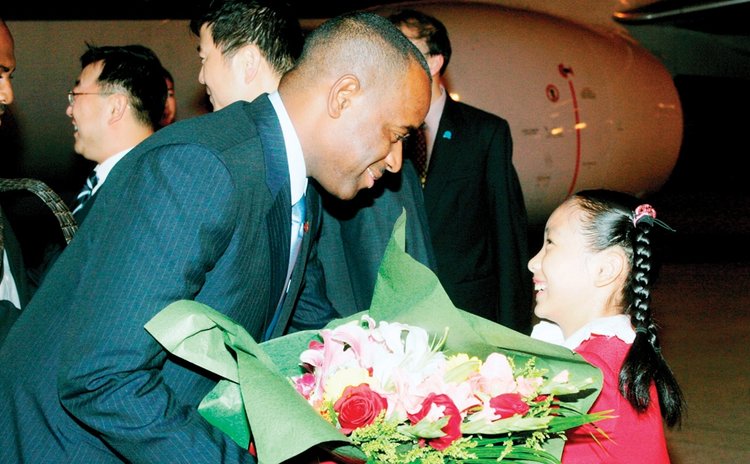 Amid the recent global spread of the COVID-19 pandemic, some developing countries are going through economic hardships. There has been some hypes from western media surrounding China's foreign aid and loan policies, claiming that China's assistance is likely to hurt the dignity and the economic well-being of recipient countries, and loans by China will push them into debt crisis. On the contrary, anyone can find countless facts in many developing countries proving China's assistance and loans are playing an irreplaceable role in the social and economic development of local communities.

China is the world's largest developing country that takes its share of responsibilities. Upholding the vision of common development, China integrates its own interests with those of other countries, providing assistance to the best of its ability to other developing countries. In particular, China spares no effort in helping the least developed countries and small island developing states build up their self-development capacity and improve people's livelihood. In conducting international cooperation, China has always played a proactive and constructive role.

When providing foreign assistance, China adheres to the principles of not imposing any political conditions, not interfering in the internal affairs of the recipient countries and fully respecting their right to independently choosing their own paths and models of development. The basic principles China upholds in providing foreign assistance are mutual respect, equality, keeping promise, mutual benefits and win-win.

Over the past 16 years of China-Dominica diplomatic relations, China has offered Dominica large sums of grants and a handful of loan projects, helping Dominica improve its infrastructure and people's livelihood and achieve economic modernization. The construction of the Windsor Park Stadium provides Dominica a venue for holding top level cricket games, as well as for big occasions such as Creole Music Festival and Independence Day celebrations. The New Town Primary School offers local communities a safe, comfortable and modernized teaching facility. Roseau Friendship Bridge and Edward Oliver Leblanc Highway provides a fast-track passage connecting the two important cities of Roseau and Portsmouth. The York Valley Bridge project has contributed a great deal to the development of local agriculture and tourism. The ongoing project of China-Dominica Friendship Hospital, which will become a modern hospital equipped with the most sophisticated medical facilities in the Caribbean, is a great boon not only to local people, but also to the development of medical tourism of Dominica. The West Coast Road that is under repair, once completed, will be resilient to the threats of tropical storms. The Dominican officials, professional and technical personnel as well as students who receive training or study in China every year are becoming envoys for the development of China-Dominica relations. Conducted since the establishment of bilateral relations, agricultural cooperation has promoted the modernization level and sustainable development of Dominica's agricultural sector. As a result, more varieties of fresh produce are available at the market and farmers have seen their income boosted. Chinese medical team have operated many types of minimally invasive surgeries, relieving much of the pain local patients would have suffered during treatment. All above-mentioned projects are Chinese government assistance and grants. The Dominican government didn't pay any for these projects. Dominica State College, a concessional loan project, which has improved the facilities for higher education in Dominica, helps attract more students from neighboring countries. Loans offered by the Chinese government only account for a very small proportion relative to Dominica's total foreign debt. The Dominican government has always paid off its debt in a timely manner, displaying its good name as a government.

In the globalized world where mankind is facing common challenges, no country will proper in isolation. China and Dominica are true friends. China is pleased to see the continued social and economic development of Dominica and improvement of its people's lives. China stands ready to push for cooperation with friendly countries in the world including Dominica, and promote the building of a community with a shared future for mankind.