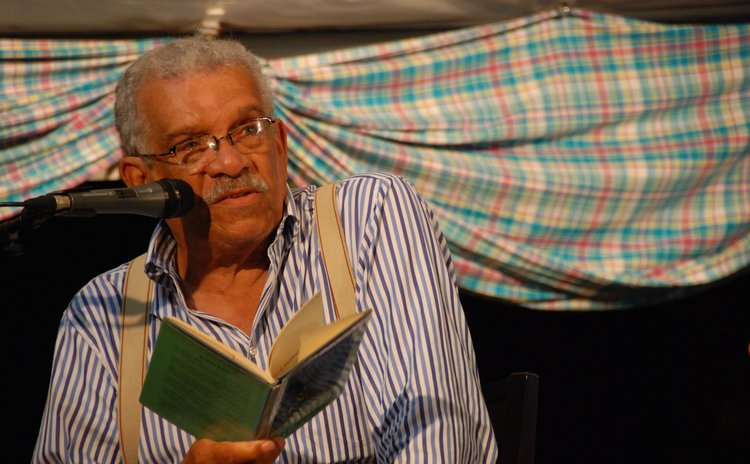 "In his own words":Derek Walcott reads poetry at the NILF&BF in 2008
By Clement S. Jolly C.Ss.R

The visit of Derek Walcott of St. Lucia to Dominica during the observance of REUNION 2008 is very timely and meaningful. For many, the big attraction is the fact that he has been awarded the Nobel Prize in Literature and that he is the author of internationally known, popular plays, 'Dream On Monkey Mountain', and 'Ti-Jean And His Brothers', and he has also written numerous poems. Also, he is the first former University of the West Indies student to be awarded the Honorary Doctor of Laws Degree by that University.

My first association with Derek Walcott's literary works came in 1949 when I read his book, 'Twenty-Five Poems', published a year before. I was then a student at the Dominica Grammar School. This book was not on the School's Curriculum. In fact, in those days, West Indian Literature and West Indian History were not studied at the D.G.S.

I was only 16 years old, but the poems had a decisive impact on me. I remember particularly two poems. One was 'A City's Death By Fire', which described the destruction of two-thirds of Castries, St. Lucia in 1949. I remember well his reference to the "hot gospeller", as he called the Fire. The other poem was 'University of Hunger'. I believe that I remember to this day the second poem because it was so West-Indianly true!

But what caught my attention even more was the poetic expression in which he engaged. His style was original. He showed little respect for what was hitherto considered poetry, to the extent that one educator told me that he had great difficulty identifying with Derek Walcott's poetry.

I remember reading a West Indian magazine many years ago in which West Indian poetry was one of the subjects discussed. The article made the point that West Indian poets, like Sir Phillip Sherlock, former Vice-Chancellor of the West Indies, endeavoured to imitate the poetic style of the English classical poets, like Gray, Goldsmith, Coleridge, Shelley, Byron, and others. With Derek Walcott, here was something new. In this light, we may describe him as the Father of West Indian poetry.

Derek Walcott's works cannot be easily read. They have to be studied. They call for deep reflection. His epic literary work, 'Omeros', which won him the Nobel Prize in Literature, bears witness to this. But what it says means so much to us! For example, he describes the well-known Caribbean experience of women, abandoned by their men, who day after day stand at their post selling t-shirts or whatever they have to offer. Here, in Dominica, it is our womenfolk who day after day are at the market-place. Like the former, some days there is no sale at all. But they are back the following day. They do not give up. They keep coming! Walcott pointedly and accurately describes the colonial experience as a fruit which is eaten, and the seed, finally sucked of all its juice, is spat out. How true!

Derek Walcott's poems and plays manifest a passion for people. What he offers is a celebration of the way of life that is the hallmark of our people. He is a West Indian at heart. He is a man of hope.

Derek Walcott must be credited with the unique ability to define aspects of West Indian culture. For example, he describes Carnival as "the theatre of the streets". He delights in harnessing well-known images in articulating the West Indian experience.

In January 1930, Derek and his twin brother, Roderick, were born. Their father died when they were only one year old, living their mother with three children. Their mother, who was a school-teacher, was forced to take sewing jobs to provide for her children.

At an early age, Derek Walcott took up writing. To publish his works, he borrowed $200.00 from his mother. To sell his books, he would stand at street-corners to attract the attention of those who passed by.

We should welcome Derek Walcott's visit to Dominica as a cherished event. Additionally, we need to celebrate it as a point of departure. Only in so doing can we fully benefit from the encounter with this great West Indian icon.