Triumph of the cross 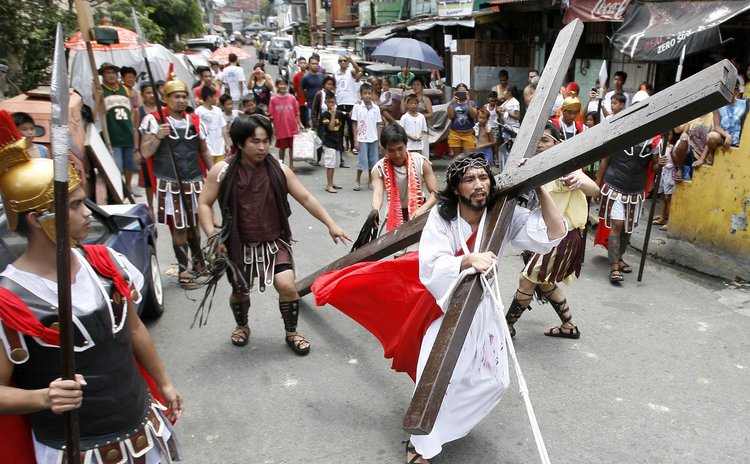 MANDALUYONG CITY, April 17, 2014 (Xinhua) -- An actor playing the role of Jesus Christ during a Passion Play on a street in Mandaluyong City, the Philippines, April 17, 2014.
By Clement S. Jolly C.Ss.R

Central to the drama of Christianity is the Cross. It is not a popular image, but one which too many is most unwelcome. It seems to speak to us of failure, disaster and contradiction. In a real sense, it bears the character of foolishness and uselessness. In a world, eager for success and fulfillment, in a world dazzled with prospects of human development, it appears to dash all possibilities of hope. For those who look for gain, it seems to spell nothing more than irreparable loss.

In the words of St. Paul, the Cross was "for the Jews a stumbling block and for the Gentiles foolishness". Yet, this was the very corner-stone of his message. He did not attempt either to water it down or to bypass it.

As for me, the only thing I can boast about is the cross of our Lord Jesus Christ, through whom the world is crucified to me, and I to the world.

In an age of secularism, the Cross presents utter incomprehensibility. For many people, the Cross remains a unsolvable problem. For all Christians, it inspires sorrow and lamentation. One would be truly inhuman not to regret that such an event ever occurred in history. Coming at the end of a career which bore all the aspects of greatness and the triumph of righteousness, mankind is led to regard this event as an abominable crime.

The disciples of Jesus were scared and ran for their lives. Who wants to be crucified? Crucifixion not only meant excruciating pain but utter humiliation. It was the death of the worst criminals. For them, in spite of all the miracles, in spite of all that they had seen and heard, the death of Christ was repulsive to every fibre in their being. Who would aspire to such a dreadful destiny?

The truth of Christianity is that the Cross is not merely an event but a mystery. It speaks to us about humanity and the world in which we live. It tells us that the world is a wicked place and that goodness is not at home. It is a sharp reminder that good and evil are always at war with one another and that all those who make a choice for good are destined to suffer for it and even be destroyed.

However, the Cross is a message of hope. For the Christian, it implies triumph and victory. For the Cross is truly the triumph of God in Christ over all the evil machinations, compromises and cruelty in a world festering with evil and ambitious deeds of a fallen race.

One man has put it very appropriately: "When everything seems to be lost that is when God shows himself." That is what Christ's death on the Cross means for the Christian. And this is a powerful message of hope for all believers.

The Cross of Christ is a grand expression of God's love for the world. Not all the world can silence the loud proclamation that "God so love the world that he gave his Only-Begotten Son." (John 3:16)

Indeed, throughout the ages, men and women have beheld in the Cross a message of love and peace:

The planting of the Cross in the heart is sharp and trying; but the stately tree rears itself aloft, and has fair branches and rich fruit, and is good to look upon.