The politics of COVID-19 relief 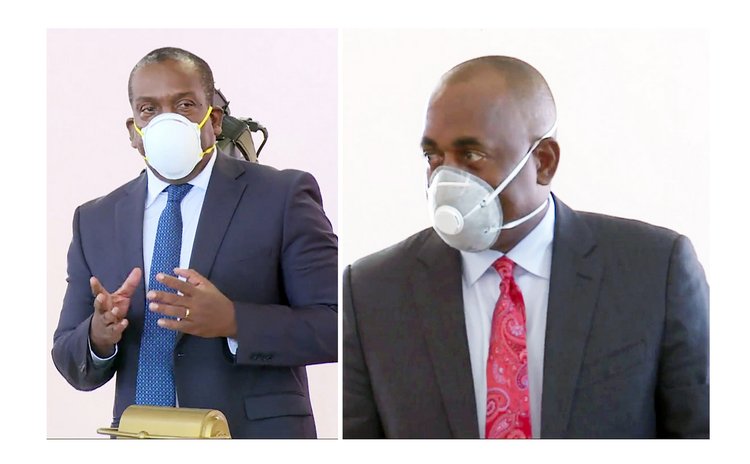 At COVID 19 debate in parliament on 6 April: Lennox Linton,left, and Roosevelt Skerrit

First the announcement of two days ago: Prime Minister Roosevelt Skerrit said to the nation that he is finalizing the details of a stimulus package of measures to assist Dominicans who have been hit hard by the COVID-19 pandemic and he will reveal the package in a few days.

But while we wait for that broadcast of the details of the stimulus package from the government of Dominica here's how the politics of the bundle has played out so far.

Recall that the opposition United Workers Party (UWP), to the irritation of the prime minister, went ahead to suggest in the House of Assembly and in a public document what the government's package should include.

When the parliament of Dominica met on 6th April 2020 to discuss the continuation of the State of Emergency and the Emergency Powers (Curfew), to the chagrin of Prime Minister Skerrit, the UWP political leader, Lennox Linton and his fellow opposition parliamentarians made the proposed stimulus package the cornerstone of their presentations to parliament.

"It is one thing to obey the curfew and another to have hungry stomachs crying to you and you have nothing to give them," said opposition Senator Ernie Jno Finn. "Many of us have lost our jobs; you cannot sell anything; you have closed down your business."

Making what Prime Minister Skerrit himself described as an "impassioned" response, Mr. Skerrit said his major preoccupation now was "fighting this virus" and not presenting a stimulus package, although that "does not mean we are not working in the background."

He continued: "It is better to have your light cut than your life cut."

Saying that "nobody can match the compassion of the Dominica Labour Party" Mr. Skerrit added that he would not "play politics with the life and safety of the citizens of Dominica."

"Those who want to play politics with it, fine; fine with me," he said.

About a week earlier, on 31st March, the leader of the opposition, Lennox Linton published a seven-page, 2000 word, paper that he entitled: "COVID-19 Dominica: Funding the National Response".

The paper contained an abstract that read: "In the absence of immediate and substantial government spending, the COVID-19 pandemic will wreak havoc with lives and livelihoods in Dominica".

In the document Mr. Linton wrote: "The response by governments around the world to COVID-19 is not limited to simply increasing the capacity and effectiveness of public health systems and social services, and providing support to businesses. Significantly, the response is also about emergency public support to maintain people's immediate livelihoods - maintain employment income, delay mortgage and rent payments, and provide for groceries medical and other necessary expenses. Health and economy are intertwined, they are on the same side of the coin."

Linton then preceded to outline what he called "the required response" from government for the health care system and for emergency relief, protecting consumers and economic stimulation.

Among Mr. Linton's proposals: Paid sick leave for those who have contracted COVID-19 and their caregivers; wage replacement or layoff protection grants equivalent to at least 90% of regular employment income or $1,000 whichever is greater, for all employees displaced by COVID-19 for three months in the first instance; monthly income support grant of up to $1,500.00 for all self-employed persons who must suspend operations due to COVID-19 for the next 3 months; direct supplementary income of up to $2,000.00 for hucksters unable to ply their trade, particularly those who travel overseas to sell produce; direct supplementary income of up to $800.00 monthly for workers in the retail, tourism and other sectors, cruise bus, taxis operators and public transportation providers affected by COVID-19 prevention and mitigation strategies, for three months in the first instance; deferral of payment for rent, and utilities for three months in the first instance; Financial support in the form of grant funding of up to $50,000 in the first instance for supply chain stabilization in small and medium enterprises; a government guarantee to ensure immediate settlement of all redundancy benefits due to displaced workers".

But while addressing parliament on 6 April, Mr. Skerrit ripped into the Linton paper saying: "Those of us who would have long dissertations on stimulus packages and sound bright and sound pretty and sound fancy, that is fine."

But one will better comprehend the Prime Minister's "impassioned" response to the UWP's stimulus package when one considers how Linton suggested government should find the money to finance the package.

Linton wrote on that issue in the paper: "Specifically, all funds collected from the sale of Dominican citizenship though the so-called Housing component of the CBI in the last two financial years (2018/2019 and 2019/2020) less amounts used for the construction of public housing and other state projects, must be immediately deposited in the consolidated fund to finance first and foremost Dominica's COVID-19 response and other pressing needs on the agenda of revised national development priorities.

He added: "Against that background, the citizens of Dominica have become more resolute in their determination to find the missing $1.2 Billion, and are equally resolute in their demand that the said amounts should be retrieved and reallocated to deal with the current COVID-19 crisis".

"The Cabinet of Ministers is further invited to institute legislation to reassign the said $1.2 Billion, in accordance with the Constitution and Finance Administration Act, and allocate an appropriate amount (preliminary estimates of $300.0 Million) for purpose of executing the measures identified as recommendations…"

That proposed source of funding of the stimulus package, and not the items themselves, must have been the irritant that re-opened several political wounds.

If you recall the UWP made the issue of "missing billions", that Linton mentions as a source of funds, the major plank of its campaign strategy for the 6 December 2019 general election.

The UWP proposal and the prime minister's heated response in parliament illustrates that the wounds of political division in Dominica runs so deep that not even "a fight to survive, a fight to live another day" (to quote Prime Minister Skerrit) that COVID-19 presents to the nation, will easily bring the political parties together.

But it is precisely this atmosphere of political divisiveness that will drive the spread of COVID-19 and obstruct the country's economic recovery.