Erika survivor: "It shocked me, it destroyed me" 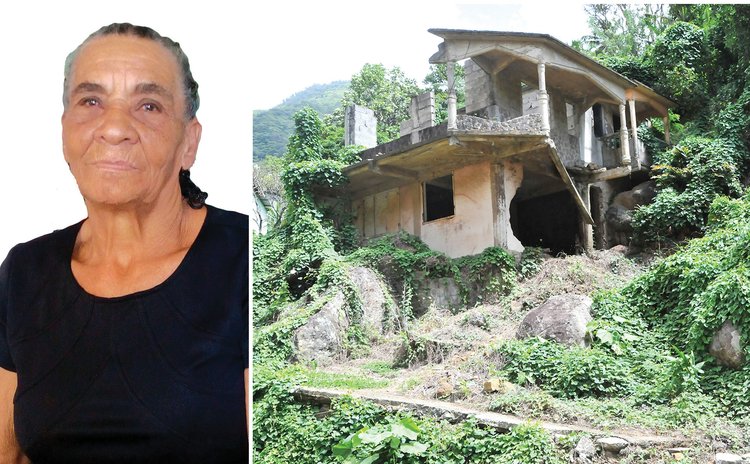 Angela, a victim of Erika and house damaged by the storm

It seemed like just a rainy morning when Angela Laurent got out of bed on August 27, 2015.

Angela realized that the rain was particularly heavy because it was beating into her room, even though the window was closed.

She tried to open the window to look outside but it refused to budge; so she wrapped herself in a sheet and returned to bed.

No sooner had she gone back to bed, Angela heard her son yelling out to her that water from a nearby river was "passing through the house".

That certainly was not normal and Angela, an elderly woman, was startled.

Her son picked her up and they hurried outside to seek shelter at their neighbor, Richard Baron's house. As her son fetched her there, she was stunned to see that the usually placid river had transformed into a raging monster.

Thinking she was safe, her son left her there with Baron's family and went to see if other villagers needed help.

But within minutes, a huge landslide slammed into Baron's house, trapping Angela against a wall.

Suddenly, she was thigh-deep in slurry, immobilized by mud. Huge stones lay around her. Miraculously, Angela was still alive.

By pressing against a stone, Angela gradually loosened the mud around her legs and slowly raised herself out of the slurry.

Luckily, three young men were able to force the door of the house open and rescue Angela and the others.

Baron was outside at the time of this slide, caught up in challenges of his own.

Angela vividly recalls the scene when she got outside.

"Coming out, is more rain; more river coming down. I tell them I not going through that river. So I rested my head on a pear tree and I prayed.

"I say 'Lord, if it is your will, let us cross.' I just see a piece of earth (from a landslide) come down and it fall in the river and the water stop. I told them the river stop, let us cross."

As soon as they had crossed on the wedge of earth, the river swept it away.

The boys then took Angela to shelter at the Guiste's home.

But her son, Simon Laurent, was not so lucky.

She learnt that he was about to check on her when a boiler exploded, killing him, her 17-year-old nephew Darven Baron and several others. Young Darven had been enjoying his summer break before starting his final year at school.

It is a deeply painful memory.

"I don't know if it is hot water, if is stone or what kill them…it was not him alone," she lamented.

Fabian Fontaine was with Simon, Darven and some other men when the boiler exploded.

Fontaine recalled that they were watching the river swell when there was a sudden explosion.

"Suddenly, I heard a big noise…like a bomb…" A landslide had engulfed the Dominica Essential Oils and Spices distillery and the boiler had exploded.

Within seconds, everyone was covered with debris. "I thought it was the last day of my life…" Fabian said during an interview last year.

The Sun was told that eight persons died when the boiler exploded. Four bodies, including those of Simon Laurent and Darven Baron, were recovered from a house just above the distillery. It appears that they were flung there by the force of the explosion.

Angela said Simon was 49 years old and made a living as a builder. He was married and had three daughters.

"A day wouldn't pass if he doh come by me. I made his breakfast for him every morning," she recalled tearfully.

Angela said she suffered a fractured leg, which was also impaled by wood. Her wounds have healed, but nothing can fix the emotional damage from the loss of her son and the trauma of that fateful day.

Her quiet life in a close-knit community where she operated a grocery store is over. Erika has changed Angela forever.

"It shocked me, it destroyed me," she said.