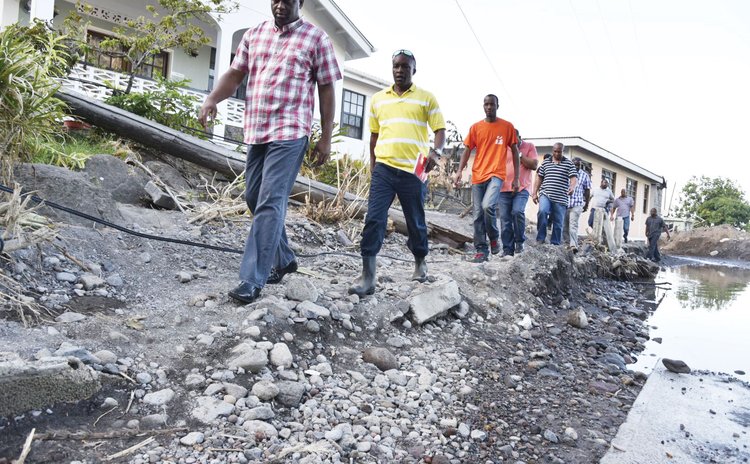 Nearly a year has passed since TS Erika, but Parliamentary Representative for Salisbury, Hector John, is dissatisfied with recovery efforts in his constituency.

John said post-Erika recovery efforts in his West-Coast constituency of Salisbury, Coulibistrie and Morne Rachette have been characterized by a general lack of urgency.

He declared that he is disappointed at the low level of attention post-Erika recovery agencies have given to protecting their lives and property of his constituents.

Further, John said that not much has been done to help constituents who suffered losses to their homes and businesses because of TS Erika.

The former Opposition Leader is urging Government to meet with his constituents, get a clear idea of their concerns and address them appropriately.

John acknowledged that repairs to the Coulibistrie Primary School are proceeding well, but claimed that the necessary urgency to restore his constituency is conspicuously absent.

"The urgency of 'now' is not there . . . in terms of addressing the situation in Coulibistrie…People want to get themselves back to normal. . .

"The government has an important role to play in terms of the infrastructure in terms of ensuring proper dredging of river, roads etc.," he said.

He added that an evaluation was done with a view to giving support to affected small-business operators. But they have received nothing so far, John contended.

"Coulibistrie needs to get the attention and they are not getting the attention," he charged. John said that some property owners received nominal sums of money for their losses. However, nothing has been given for repairs or for loss of their properties.

He noted that the Seventh Day Adventists are building 10 houses in Platt Ma Pierre, but residents are not clear who will be the recipients of those houses.

Prime Minister Roosevelt Skerrt, in his 2016 Budget address said Plat Ma Pierre in the Colihaut constituency is being developed to accommodate homes for displaced families of Colihaut, Coulibistrie, Dublanc and Bioche.

"Work on six houses is ongoing and three of them are already well advanced and it is expected that over time an additional 19 will be constructed," Skerrit said.

Highlighting the seriousness of this situation, John noted that many residents had to seek refuge at the resource centre during Tropical Storm Erika.

John also pointed to the need for proper dredging of the river in Coulibistrie and for retaining walls to be erected.

"The people of Coulibistrie deserve to get attention from the government…regardless of what party you support or which party you voted…the government should make sure they take care of your well being, your basic needs…"

John also wants to see fishermen and farmers adequately assisted to get back on their feet.

He noted that farm production from upper Salisbury has declined because farmers did not get financial support or agricultural inputs although their losses were assessed by the authorities. In the 2016-2017 Budget address, the Prime Minister acknowledged that farmers could not reach their farms because of erosion and landslides that affected feeder roads.

He said work has begun on 13 feeder roads being financed under the Banana Accompanying Measures (BAM).

Skerrit also spoke of a special loan facility being made available to the agriculture sector.

Nevertheless, John highlighted the need for urgent road works to boost the recovery of his constituency.