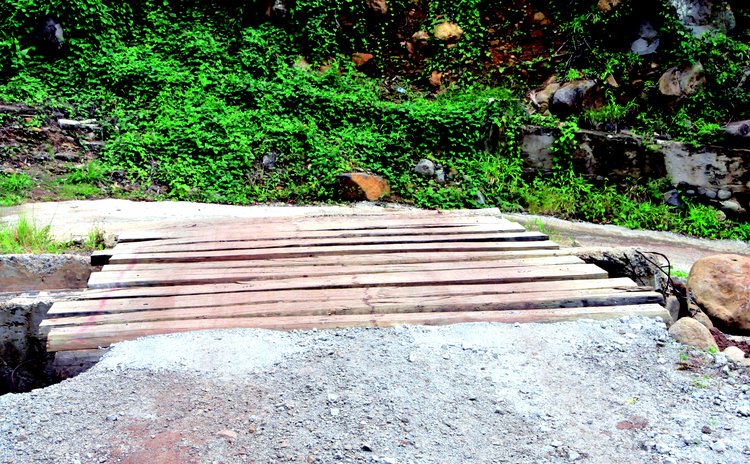 Bridge built by the few remaining people of Petite Savanne

Only time will tell as many residents are reluctant and continue to cling to the place they once called home.

The State has since been paying for their accommodation in hotels and apartments.

But many dislocated residents are not keen to go there.

One woman said she misses living in her own house, which the storm did not destroy but which lies in the direct path of a possible landslide.

She doesn't care much for Government's proposed relocation site at Bellevue, stating that houses there are much too close together.

Despite Petite Savanne being designated as a danger zone, she goes there often, spending about three days at a time.

Asked if she intends to stop visiting, she replied, "It would be a long time before I do." Petite Savanne is still the only home she knows.

"Here I was raised, here I know," she said, adding that she would not have left if she did not have school-age children.

Yet, the Petite Savanne has lost a vital aspect of its character, she admits wistfully.

She added that, despite their warm greetings and smiles, the tragedy still rests heavily on residents' minds.

But he has a burning question: what about land for farming?

Watts explained that he had three acres of farmland at Petite Savanne and made a living from selling his produce, but he was forced to abandon this after the storm.

"Finding a job now is a phenomenal [effort]," Watts said. "People have to move on, not just putting people in a house and saying that's ok.

"We have to fend for ourselves after we are given our houses," Watts added. Therefore, he wants to get land for farming.

And he is not alone in his bid; he noted that about 12 other farmers want to resume farming after being relocated.

"Presently I am taking a shelter in Grand Bay…nothing I can do in Grand Bay. And when I am bored I come around that part of the island and I just sit…just watching my land go," he said.

Watts mentioned that Government gives him a displacement allowance of $87.50 a week.

Another Petite Savanne resident said evacuating the area right after the disaster was a good idea, but it was a bad decision to make the evacuation permanent.

He is certain than many villagers want to return to live in Petite Savanne again, but they are not the type to protest or make a public fuss that the area is deemed uninhabitable.

"I believe our village is still livable…I think Government should look at that decision again," he said.

He said his survival was heavily dependent on making a living in the Petite Savanne community.

"All this has been taken from me and now, I would say I am living like a stray dog."

Another man who said he spends a great deal of his time at Petite Savanne remarked that outsider's concept of the community after Erika is much worse than it really is.

"A lot of people that knew the village before, inside out, would say they are not seeing any reason why people should not be at their homes," he said.

This man pointed out that many places in Dominica are prone to slides. "You can't move people from everywhere," he said.

He does not believe that the area is still a danger zone and said, "We need to have our village opened so people can keep coming back."

There are some people who need to move, but not everyone is in that position because places like Rogiste and Galba are virtually unscathed, he argued.

Furthermore, he does not like the new Bellevue Chopin location.

Also, many will be forced to find new ways to earn a living since they were heavily dependent on Petite Savanne for their livelihood, he said.

Some are contending that it would cost less to restore Petite Savanne than to relocate the residents.

"If they are telling us not to stay, they should compensate us," one villager contended.

He said his displacement allowance has been withdrawn and he presumes this happened because he has returned to live in Petite Savanne.

Meanwhile, dwellers and dislocated residents have been doing minor infrastructural work – including building a bridge -- to keep the village traversable.