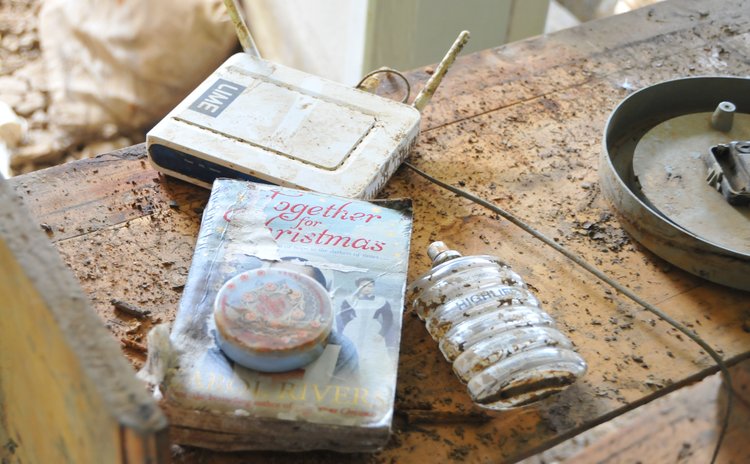 It's a warm, sunny morning in Petite Savanne.

A gurgling stream of water meanders cheerfully through what is largely an unwelcoming bed of rocks, playfully coursing over stones and trickling through narrow gaps.

The sound is soothing; but why are there so many rocks? This question takes us back to a fateful date-- August 27, 2015. That was when this seemingly playful little brook became a massive, churning mass of water, overflowed its banks and joined with another apparently tranquil waterway to wreak havoc.

Together, they contributed to what is now known as 'the Petite Savanne disaster' when the area was riddled with landslides that buried property and claimed lives.

The village will never be the same again. Government evacuated the area and has since declared it unlivable.

As we visit, one year later, villagers are in the early stages of preparation for a memorial service at the Catholic Church, which was closed after the tragedy.

A dislocated resident is cheerfully washing the steps of the stone church.

Foliage now covers much of the evidence of what happened on that day. But there are still ugly scars on the mountainside, as though the soil has been crudely gouged out with a huge spade.

Huge boulders here and there are permanent reminders of what happened that day-- like a boulder that now squats heavily where a church once stood. There is absolutely no sign of the church.

The guide on this trip to Petite Savanne leads us through a trail of pumpkin vine and bushes. There is no sign of the road that used to be there.

After a short walk, we come upon a spot beneath a mountain that still bears the sign of a landslide.

An abandoned house, still a bright shade of green, stands on one side, partially covered with vegetation. Perhaps no one will ever live there again, considering where it is and what happened.

A landslide took eight lives and covered four houses on this spot. Now, all that remains is a giant boulder.

The only telltale sign that there were other houses there is a piece of a galvanized roofing sheet poking out of the earth.

As we drive through the village, the guide points to various empty spots where buildings were once located.

He also points to a number of family homes, which he said are now abandoned.

Ironically, despite the tragedy that happened here, the village remains a beautiful spot. Some still live there; others visit constantly using a daily bus service.

Colourful foliage still lines the road to a large extent. And apart from the bushes on the road sides in some areas and occasional derelict vehicle, the environment is mostly clean.

For the most part, the main road is bare, except for a few abandoned dogs and cats, some of which appear painfully thin.

However, we see people from time to time, sitting on their porches or emerging from inside the houses as our guide calls out to them.

The few people happily greet our guide and one offers a beverage.

Residents and some dislocated visiting dwellers explain that they return to plant, reap and to tend to their houses.

Some are also rearing small numbers of livestock, such as chickens and goats.

One man has reopened a small shop in the village. He gets ice from Roseau and sells drinks and other small items. A bench outside the shop soon attracts a few people.

We are told that some of the villagers who have remained sometimes gather at the home of one man to look at television and hang out during the evenings because he has a small generator.

A bus operator is plying the Petite Savanne route daily as people continue to visit the community that they still call home.

A little girl sitting on a porch explains that she was visiting with her mother.

She wouldn't mind returning to Petite Savanne and particularly misses walking to the colourful, now abandoned school with her friends.

Clearly, some villagers are puzzled in relation to what their next step should be.

They are due to be relocated, but it would be difficult to for them to get accustomed to new environs. Yet, they would like to get settled once and for all.

Despite the tragedy that has occurred there, most of those still visiting Petite Savanne say they want to return permanently to their village.

And they remain reluctant to let go of the beautiful village they once called home.